How to Dispose of Storage Auction Unit Trash 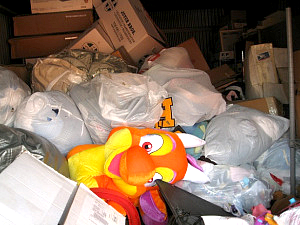 Some of the storage units you buy are going to contain trash and items that are difficult to sell.

In such a case, how do you get rid of these items without aggravating the garbage man?

Well, let me start off by reminding you that one persons trash is another persons treasure. Believe it or not, I made as much money selling the small, almost worthless items as I did selling the nicer stuff.

If the merchandise is broken or literally trash, just get rid of it. Although, you might be surprised what actually sells at garage sales & flea markets. I recommend running these insignificant items through a few sales before you let them go. The key to being successful in this business is maximizing your profit on every unit you buy and making a few extra bucks here and there can really help your bottom line.

If you have several bags of trash, you can probably just set them on the curb for trash pick up without any issues. If you have truck loads of trash or larger items that the trash man will not pick up, you may have to make a trip to the dump.

The average dump fee is around $35 per truck load and if you are making several trips per month, it can really add up. I personally have never paid a dump fee because I always found creative ways to get rid of the things I didn’t want.

In most areas, there are charity thrift stores that accept donations. Donating to these places can be a great option because they typically give you a tax deduction and you are helping less fortunate people obtain the things that they need at a lower cost.

Not only that, the items that you donate get a second life and avoid the landfill, which is good for the environment. Some local resale shops accept donations as well.

Some areas have local donation drop boxes. Although the drop boxes may be more convenient, you don’t get a tax deductions when you donate items there. Of course, you cannot leave actual trash at these locations but you can leave items that the nicer thrift stores may not want.

Donation drop boxes don’t refuse anything and you can leave things there 24 hours a day. And believe me, being able to get rid of things anytime you need to will surely come in handy.

Here is a little trick from my personal arsenal of creative ways to get rid of things you don’t want. When I was buying full time, we were filling up two twenty six foot U-Haul trucks worth of merchandise every week.

On average, I refilled one half of a twenty six foot U-Haul truck with left over merchandise, after our garage sale every week. I would separate the nicer things that I wanted to keep from the other miscellaneous items, then I would place an advertisement on Craigslist under the free section.

For those of you who have never done this, I would like you to know that there are scores of people who watch these ads all day long and they are eager to pick up anything that is free. Just place an ad that says, “Tons of free stuff – on curb now” and include your address.

Twenty to thirty minutes later you will have several people there hauling the stuff off. Remember, one persons trash is another persons treasure and these people know this better than anyone else. The only draw back to this method is that sometimes, they can leave you with a mess.

I got so frustrated with the messiness that I decided to change my strategy a bit. I still placed an ad in the free section of Craigslist, except I was more specific in what I expected from them. First of all, I didn’t include an address in the ad because I wanted to select one person and a few runners up in case the first person didn’t show up.

I put in the ad that I would only give the merchandise to someone who owned a large trailer, someone who had a few other people to help them move the stuff and someone who was willing to take everything, the good and the bad.

The reason that I insisted that they own a large trailer is that I didn’t want them to have to make two trips to haul off the stuff. If you allow them to make two trips, they will haul off all of the good stuff and never come back for the rest.

After I had been doing this for a while, I met a couple that owned a thrift store and they were willing to pick up the merchandise every Saturday, after my garage sale was over with.

Please leave your insightful opinion in the comment box below.