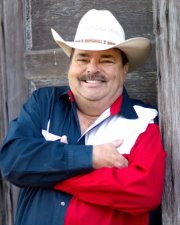 We recently had the chance to interview Walt Cade, the auctioneer from Storage Wars Texas. Although his schedule is busier than ever, Walt took some time to answer some questions that will help us get to know him better. If any of you would like to ask Walt a specific question, please post your interesting and creative responses in the comments section below. Once we receive enough questions, I will be glad to forward them to him. Enjoy!

Q. Have you seen an increase in attendance at your auctions since Storage Wars Texas premiered?

A. Of course, business is good and the exposure has been fantastic.

Q. Do you get treated any differently in public now? Do you catch people staring?

A. Maybe, but I’m still just another ordinary guy with a love of people, so if I have something that interests them, I’m ready to share. But most importantly, I get to meet a lot of new people. When I am noticed, I try to NOT be distanced. A smile lets them know I am certainly approachable.

Q. Do you get a lot of people asking you how they can get on the show? If so, what do you tell them?

A. I’m always glad to take a card or note from them and pass it along. Of course, I’m not the person that makes those decisions. The show is pretty good at making selections as they know what they want.

Q. I noticed your email address begins with “Taxman.” Are you a former accountant or is there a hidden meaning in that?

A. I retired from the tax business after 30 years. My youngest son took it over and is doing great. I no longer have any ownership or partnership in the practice. I’m absolutely and totally retired from it.

Q. People refer to you as the Colonel. Were you in the military?

A. Licensed auctioneers are referred to as “Colonel.” The term dates back to the early war days, where only a Colonel or higher in the military was allowed to sell off possessions. I do not have any military history in my background. For the most part, calling an auctioneer Colonel is simply a great respect for the profession, but we certainly should never forget true military respect for the term.

Q. What do you enjoy the most about auctioneering?

A. I enjoy meeting people, and love watching them make a good deal and gain a great unforeseen bargain!

Q. All good things eventually come to an end. What are your plans for when the show is no longer on television?

A. Well, truthfully, I love helping people. I hope to use any show background to continue to raise money for causes that I am passionate about.

Q. Do you have a favorite member of the cast or crew and if so, why?

A. No, I do not. Victor, Lesa and Jerry were bidders of mine that followed me to auctions prior to the show. I’m really proud for them, but all the others on the show are awesome too, so no, I do not have any favorites.

Q. What do you like to do when you’re not auctioneering? Do you have any hobbies?

A. I have a small ranch with my lovely wife Cheryl, who you can get a glimpse of, often next to me on each episode. I raise Christmas trees and I raise catfish. My only other hobby is the auction business that turned out to be a full-time job (laughs), but I love it.

Q. Have you ever personally bought a storage unit at auction?

A. I do not buy, I only sell. People want an auctioneer that can provide merchandise, not compete with them.

Q. I think we can all agree that the original Storage Wars and Auction Hunters changed the storage auction business as we knew it. Do you think things will ever get back to the way they used to be?

A. Of course, I cannot comment on the other auction shows, but what has happened will only change for the better. Way back when units were lower in price, facility managers and owners wouldn’t have auctions often as they wouldn’t bring much, so it was not worth their time to auction them off.

Also, they still had vacancies, so they let them sit longer. The renter would eventually pick thru them over time until there was little worth, thus the $5 units. Now, what has happened is, the units are in demand and management needs the space. They can now auction them and make a better percentage of their loss back, so it is now more worth while.

Q. Since the show premiered, have you had an increase in storage facilities that want you to conduct their auction?

Q. We see you out there working up a sweat. Do you wear your cowboy shirts all year round? By the way, the joke you made, “The guy that said, ‘never let them see you sweat,’ must not have lived in Texas”, was pretty funny.

A. We had some 110°F degree temperatures last summer. I do have to stand near the units during the auction and often get really hot while the bidders can stand in the shade. After the auction, those same bidders have to climb in the units, which is the real heat, often reaching temperatures in them of 125°F+. So, I’m not complaining, the heat I feel is nothing in comparison to theirs later in the day!

Q. When you’re filming, is the attendance better or worse than when you’re not?

A. Not necessarily, it depends on if they are trying to get some face time on the show or just there to seriously buy units.

Q. Being on one of the most popular shows on television has to be exciting, do you ever pinch yourself to make sure it’s real?

A. I am humbled by the experience, and yes, I guess it’s still hard to believe at times.

Q. Being famous changes a lot of people, how do you stay so grounded?

A. Well, I’m certainly not what I would call famous, by any means. I put my pants on just like anybody else. We should all remember where we come from. I am a normal person and I hope to stay that way. I have a love for people, and most importantly, I want all my friends to say, “Glad that show did not change you!”

If you like the article that you just read, recommend it to other readers by clicking the share buttons. Do you have a question or would you like to add something to this article? Feel free to leave your interesting and creative responses in the comments section below.