Ton and Allen made their way to Riverside, CA.

A city which Ton declared was full of M-O-N-E-Y.

Fact: In 1910, the booming citrus industry made Riverside the nation’s wealthiest city.

Hope to score big on expensive antiques and pimped dune-buggies. Haff-Ton pulled up to the parking lot only to discover a HUGE crowd. How many storage units up for sale? Three. Yes, a whopping THREE units!

Ton and Allen, call for you. It’s Bummer City. And it’s collect.

Duo also ran into Mr. Fancy Shirt whom it seemed that Ton once dumped a bad unit on him. Fancy Shirt never got over it. 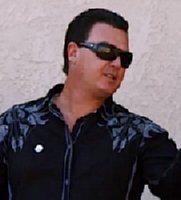 Outbid faster than you can say, ‘Ed Hardy sucks’ – Mr. Fancy Shirt swooped in for the kill. Sniped the deal with a bid of $240. Done and done.

Filled with large appliances, musical instruments, and collectibles dolls. Ton and Allen liked what they saw.

Duo agreed on  $1,000 cap. Mr. Fancy Shirt however will look to nab it out from under them. Strategy time. Allen played with everyone’s mind as he walked through the crowd and shouted his bids. Ton gave Mr. Fancy Shirt the stare down. Strategy paid off. Haff-Ton won at $875.

Take THAT, Mr. Fancy Shirt.  And by the way, you still have bad taste.

Bingo! Antiques Allen looked for. Ton’s gut told him there’s money in a large ‘mystery box’ in the unit. Allen declared a cap of $800 max. Ton said he may go higher.

After trading hits with Mr. Fancy Shirt; the smoke cleared and Ton threw $1,125 for the unit.

Duo also found a an antique BOOZE Barometer (the 1950s version of a breathalyzer test). Mystery box had a SingleCycle.

SingleCycles were props used in movies – not kidding.

Fact: Mono Cycles are featured in the films “Revenge of the Sith” and “Men In Black 3.”

Back to the other unit they bought…

Fact: Clarinets by French manufacturer Buffet Crampon can sell for over $5000.

Also found a type of ‘Assassin Robots’ from the movie Matrix. Alas, it is an antique hair curler.  However, given that fact you plug electrical wires into your hair and scalp, it may still be just as deadly.

Nonetheless, the Duo thought they could get $500 dollars for it. And speaking of deadly; they also discover an old flintlock gun.

Fact: The first flintlock weapon was made for King Louis XIII of France in 1610.

Blunderbuss-type barreled shotgun which may have been used for shooting more than turkeys.

Fact: The blunderbuss is an early form of shotgun with a flared muzzle.

Duo contacted with an antiques weapon dealer who wanted to meet them and see a demonstration of the gun.

Fact: First used in the Vietnam War, the Claymore mine hurls 700 steel balls at 2,686 mph.

Did we mention he wanted to meet at a cemetery?  Why? Because all the good gun deals happen there. Duh.

Gun dealer explained the gun was European. Built around the 1800s. Used to GUARD cemeteries from grave robbers. Whoa.

Unfortunately, our weapons dealer didn’t want to buy the gun, but he offered to add the weapon to his auction. They all agreed. Shook shake hands and walked away.

But not before a little demo of the cemetery gun.  Mwuahahaha!

Next, the Duo zipped over to see their pal, Josh. Customizing bikes of all shapes and sizes his specialty. Although, he’s not quite sure what to make of the SingleCycle.

Josh declared that if it ran, the contraption could be worth between $5,000-$7,000. But if it didn’t start, it was worth diddly-squat.

A tense moment when Josh tried to fire up the SingleCycle. Suddenly, it came to life. He took it for a quick test run around the lot.

Duo pulled in a cool six grand for the SingleCycle. Ton’s gut a genius.

All in all, the boys walked away from Riverside with a nice wad of cash. To celebrate they threw back a few tequila shots to test out the BOOZE Barometer.

What did you think of Mr. Fancy Shirt?