Auction Hunters: Pawn Edition: The Mother Of All Guns 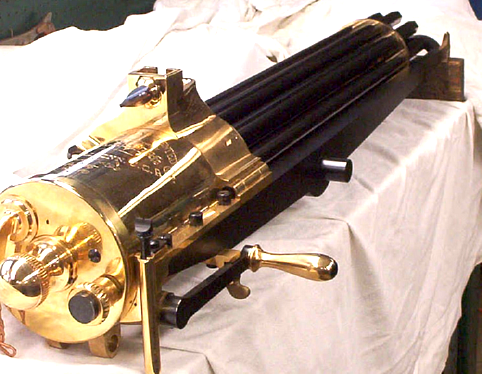 Shootout at Panoma storage auction on Route 66. Haff-Ton team versus Hellcat man-haters Brunette & Blondie.Friendly banter between the two teams before the auction.

Allen: Maybe today I can give you a few pointers. Lend you a flashlight.
Blondie: Zip it, bitch.

Son of a biscuit it got ugly fast. Someone call 9-1-1. Fire in the house and the auction doors yet to open. But it would turn out the B&B team was loaded with blanks rather than bullets.

First unit stacked neat. Eyelet machine, boxes, and a handmade wooden box that caught Ton’s attention. The Hellcats were clueless to the value of the unit, but their strategy was to bid up then dump the unit on the Haff-Ton team. But the bid stopped at $800. That’s an easy win for Allen and Ton.

You call that a bid war? Puh-lease.

The second unit was a mangled mess of trophies, uniforms and mystery boxes. The Hellcats were bent to win the unit. Why? To make sure they won a unit. With that mentality they will quickly run out of cash and be forced to take up another hobby such as underwater basket weaving.

Allen and Ton used same strategy to up the bid up the gals. Brunette and Blondie paid $500 for, well, nothing. No one else wanted the unit. Maybe the Hellcats were both near and farsighted.

Last unit contained a gun case, guitar case, fishing poles, and other man cave items. The Hellcats were all talk about how they were going to up the bid but again tapped at $800. That’s like butter for the Haff-Ton team who in the end got the last LOL.

First unit dig was to fire up the USMC eyelet machine. Older unit but looked in decent shape. It’s primary function is to punch eye-holes in boots. Flipped the switch and nothing. Not a sound.

The gun case was empty in the second unit. A pink guitar in the guitar case (ew). Rest of the items a bust. However, they did find a huge metal box. Inside was a replica of a full medieval suit of armor with chain-mail. Allen flipped from man-boy to boy in a snap!

Two replicas worthy of appraisal. Off to a ranch to meet prop master Peter who supplies Hollywood with all things that go BOOM! Oh, my, my he was impressed with the 1862 Gatling battery gun replica. Fires single-action shots at 300-400 rounds per minute.

Dr. Gatling made this gun for the Union during the civil war to end all wars. Little did he know he had made the-mother-of-all-guns to come.

Ton was pumped to test the gun on a prop jeep on the ranch. He cranked the Gatling. Nothing. Gah! Not again. Ton took out the magazine. Prop master fiddled with the mechanics until he heard something pop inside.

Single shots obliterated the prop jeep. Sold Gatling for $3,300. The medieval suit was appraised back at the pawn shop. Expert in Amory and Weaponry Dave stated the suit was a mid 1500s replica constructed of aluminum and custom orders run at around $15,000-$18,000.

Put the sword back in its sheath. No way would Dave pay retail. Remember, this suit will fit only a particular size because it’s custom made. Allen tried on the suit. He looked ridiculous. Few parts amiss but sold for $6,000.

Ton shot his way to a profit. Allen paraded in a suit of armor to Camelot, but only in his dreams.