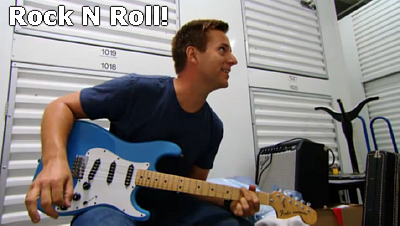 Allen and Ton head down to West Adams. It’s an old neighborhood in LA that was once home to stars back in the old days. , Probability to find some antiques looked good.

With a budget of $1000 in their pockets and five units to bid on, Haff-Ton ready for bid wars.

A man muttered he would bid up to $3K, but Allen was not going to fall into a trap. He called the man’s bluff. Haff won the storage unit for $475.

Next locker a mass of trash bags. Ton stated the obvious: trash – trash. Then it happened. Ton spied a vintage alcohol dispenser. Logic called to rethink the trash unit. One vintage item could be an indication of hidden treasures. Haff-Ton team won the storage unit at $225.

Last locker and only $300 left to spend. Haff-Ton team see a lot of old electronics and computers. Allen speculated there could be an estimated value of $1k of merchandise. With mild interest from the crowd, it was an easy win for Allen at $275.

Haff-Ton team dug through this storage unit first. Computers did not look good as they were outdated. Allen dug further and found an old Atari System still in its original box. 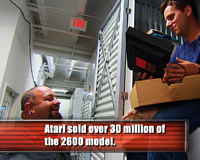 Next up the liquor dispenser unit. Haff-Ton discovered vintage silver from the 50s. An old telescope, possibly used for the military due to its markings. Then a sweet find, a vintage Schwinn.

Allen ROCKED OUT on the guitar for a bit. You might accuse him of showing off, but Ton beat to it.

Duo took the military telescope to Bobby, a military expert, for appraisal. He stated it was the type used tanks back in the 40’s. He did not show an interest to buy the telescope, but that they would find a home for it.

Ton thought the best home for the telescope was his own.

Next they take the guitar to Norm, a guitar expert, for appraisal. He stated it was a classic USA brand that many famous rock stars used. Jimi Hendrix and Eric Clapton, to name a couple.

Color on the guitar indicated it was a limited edition. Norm used a black light to check that the guitar had the original color and was not repainted. Good so far. Norm checked the parts of the guitar.  Allen and Ton sweat bullets.

All original. Phew! Guitar valued at $3,500. Norm wanted that classic rock-n-roll and negotiated to pay $2,200, including the amplifiers as well.

Haff-Ton recouped their money and were solidly in the black. Last item to appraise was the Schwinn bike. Haff-Ton team reached out to Andrew, an antiques dealer, for appraisal.

Andrew pops with excitement. He stated this particular bike dated back to the depression era. What was impressive was that the bike had all the original pieces intact.

Andrew valued the bike at $8,000 but he was only willing to pay$2,200. Allen countered at $4,000 as he rode the bike around. Andrew appalled that Allen would ride that vintage bike.

Andrew finally offered $3,400 just to get Allen off the bike. Nice play there, Allen.