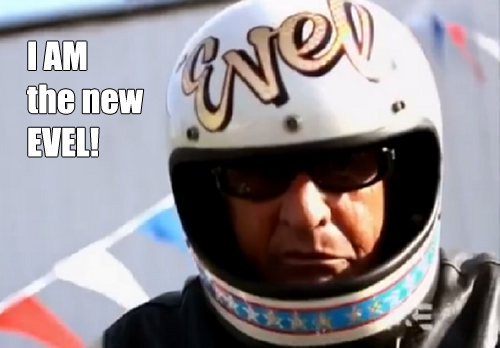 Barry Weiss jumped over 15 buses on his motorcycle! 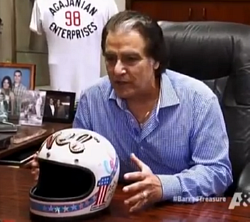 Chris Agajanian, a friend of Barry, wanted a leather jumpsuit. Not a disco jumpsuit, mind you.

Evel Kneivel’s leathers (as they call it in the racing world). Evel was only the most famous daredevil in American history.

Buyer owned Evel’s helmet which was worn in 1975 on the daredevil’s last jump. That event was the highest rated televised episode on the Wide World of Sports.

Helmet was signed and given to Chris by the daredevil himself. He needed, craved, yearned for the leathers. (I laid it a bit thick.)

Sidekick also sidetracked Weiss into a recording studio. Kenny recorded a rap song, Who Would Have Ever Known That. Apparently, Kenny’s sensei was banging (his words, not mine) Barry’s cousin.

Does that mean they’re related? The Collector and King of Pralines. Weird family tree.

Next pit stop by Kenny as well. His friend Cory’s garage. What now? Kenny had Cory create an animated Barry Weiss Evel Knievel. That was cool.

Yoshi owned a motor shop. Also a fan of the daredevil’s memorabilia. He had a leather jumpsuit, but it wasn’t authentic.

Wow, Barry, get it out already! Yoshi’s response.

Bruce Meyer from Beverly Hills, that’s who. That information was only on a “need to know” basis, “you know.” 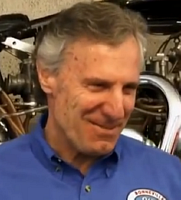 Bruce did own leathers from Evel that he’d kept for thirty years. He went to retrieve it.

Barry: Oh, you got the blue ones. These were like his practice leathers. He jumped more time in these than an other leathers he’s owned.

Chris: This is the real McCoy.

Time for Barry Weiss to jump over 15 buses to break Evel’s record. Chris and Bruce sat and watched for victory or for defeat. Chris even loaned Barry the Evel Knievel helmet. 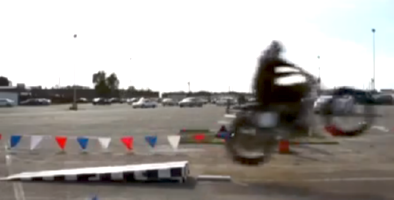 Did you watch any of Evel Knievel’s stunts on YouTube?