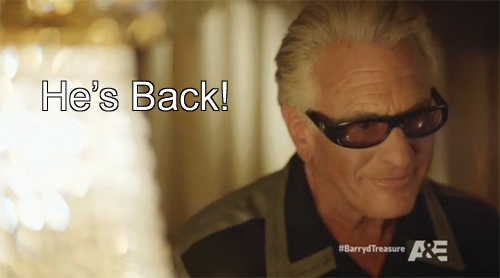 Barry drove to eastern Pennsylvania to meet up with Carter Reese. Yes, that’s Reeses Candies himself. He has been a collector for fifty years who needed to thin his hoard of collectibles. Barry took his sidekick, Kenny “The Praline King” along for the ride. Barry wanted to deal Reeses’ collectibles. Kenny wanted to sell his pralines to Reese. Why is this not such a good idea?

Barry: Since I retired from the storage auction game, I’ve been caught up in a whole different racket. Acquiring rare things for strange birds.

Carter collected salesmen samples. For those who are unfamiliar they are simply miniatures models of a product inside a store used by salesmen to push the product to distributors.

Carter had over 800 salesmen samples. Wow!

Barry also took a sample Compound Marine Engine worth $8,000 and a sample Recl

iner, which was valued at $200. Barry thought it would make a great opening piece for the deal.

All the pieces were fully functional, even the recliner; but Barry wasn’t quite done.

Barry: I’ll take the marine engine, the farm implement, the recliner, and one other piece which you’re not going to be happy about.

He also took a sample Barber’s Chair from 1910, worth a whopping $40,000. It was clearly one of Carter’s favorites. Not at all wanting to part with the item. Reluctantly, he agreed.

Barry and Kenny packed the items in the trunk and drove off.  A few wrong turns later, and the two were lost in Amish country.

the highway. Barry took an instant liking to Jake and decided to take him along on their adventure.

“But don’t tell the Bishop!”

Barry took the items to two more antique stores. Too expensive for their clientele.

Barry decided to take a break from work to give Jack a makeover. The trio went shopping for clothes. After, Barry then decided to introduce Jake to a non-Amish, tattoo-riddled gal. Barry had them share a root beer float. I think Jake blushed!

Barry: But let’s get one thing straight, nothing’s more valuable than a good time.

ord. He might be interested in the items. New Oxford was right next to Jake’s farm, so the guys dropped him off and said their goodbyes. An Amish kid with a suit?

Barry and Kenny shouted back at Jake: “Don’t tell the Bishop!”

Kelly was very interested in the salesmen samples and didn’t bulk the prices. Barry offered him a volume discount if he wanted to buy in bulk, and took him up to meet Carter.

Barry: Come on, you guys are pros. You know that the best deal that’s going to happen here, you’re probably not both going to love it.

Barry suggested the happy compromise of $35,000. Both men agreed.

Now it was time for Carter to show off his pralines to the Reese family. Carter loved them. However, his family has been out of the candy business for years. Whoops.

What did you think of Barry’s new show?