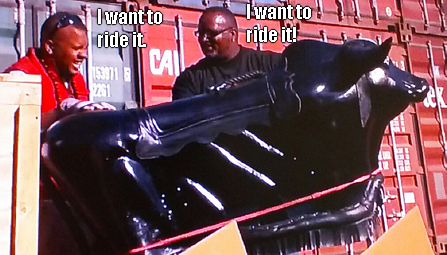 Buzz about the shipyard was that there’s a container full of artwork that could be worth a fortune. Matt hungry for the kill. His strategy was to bid up all the containers to empty out the pockets of his competitors. Good plan.

1st Container: Port of Origin – Santa Rita, Guam
Double barrel artillery guns, clues of paint ball equipment, and possible army surplus gear. Shlomi revealed that he was in a parachute unit and believed the “big guns” were an anti-aircraft weapon.

Here’s the thing, if it’s an operational anti-aircraft weapon, it’s illegal to own. Matt’s concerned about possible red tape that might be involved.

Shlomi: If it’s legal, we make a lot of money. If not, they take it away. We’re screwed, but we’re going to go for it.

Trio won and called Stan, an expert on weaponry and knowledgeable on what’s legal to own. The big guns were Anti-Aircraft Twin Japanese Guns. If the guns were real and operational, valued at $35k with a 20 year prison sentence.

Israelis also had a M-151 or “Mutt” – Military Utility Tactical Truck. The M-60 automatic weapon on the vehicle was nonoperational. Phew, they could legally resell the items. The trio also had a blast playing with their paint ball gear. 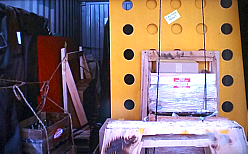 2nd Container: Port of Origin – Victorville, California
Carnival stuff and a car underneath a tarp. Deana noticed the size of the tires, called it an “Old Folk’s Car.” Possible Model-T which would be worth a ton of money. Matt could not wrap his head around why an antique car would be in a mix with carnival crap, but that didn’t stop him from punching up the bid to make Deana overpay for the container.

What did Deana find? Um, carnival stuff, doh! Rings and bottle game. Toss bean-bag game. Yep, CAR-NI-VAL crap. But what about the CAR? It’s a Model-T. Yes! Upon closer inspection… oh, no! It’s a replica Model-T converted into an ice cream car! Bahahaha!

Deana: I really got fooled on this one.

Who would be dumb enough to buy this? Jason. He thought camera equipment would be shipped along with the courtroom set. Uh, Jason, film equipment is rented. What did he find? Bench, wardrobe, jury stand with twelve chairs, etc.

Jason: No camera. No lights. No action.

4th Container: Port of Origin – Butte, Montana
Boxes. In the far back Mo spotted the horns of a bull, and no, I’m not BSing you. Matt thought this was the fine art container because hay is often used to transport art. However, Mo & Ty raised the bid beyond what Matt would risk.

Mo & Ty found cheap rodeo gear in first few boxes. Not a good sign. First crate however turned things around. New saddle-style bar stools. Probably décor for a western night club. Did they find a bull? Yes they did. A black mechanical bull that would buck them into the black.

Ty: This is it. This is our meal ticket.

That’s no bull (bleep) about it!