Ty talked a little trash to the Israelis, but beyond that, the morning was very quiet. John the auctioneer was late. Not an exciting way to start an auction, however, tempers would flare and another brawl broke out between Team Muscle and the Israelis. Just another day at the shipyard.

1st Container: Port of Origin – Porto Alegre, Brazil
Blue barrels front and center. Hard to see what’s in the back. Labels on merchandise in Portuguese translated – Water. Eyal believed there might be aquariums which could easily be flipped to restaurants owners. Mo spied the excitement building at the Israelis’ camp and decided to follow their lead.

Uzi bid by flashing a wad of cash in hand. Honestly, not only is that hubris but it’s ridiculous. Who does that? Uzi then told Shlomi to, “Show them the Money.”

Truth being, no one really wanted to bid on “Agua,” or water as it were, so the Israelis won. Shlomi opened a few boxes and yep, aquarium equipment including pumps, coral, wires and more. Cut through wrapping yep, one huge aquarium and four smaller aquariums. The bonus was the aquarium coffee table.

You were, Eyal. No one wanted to buy the saltwater jugs, but they didn’t think to look beyond the barrels. 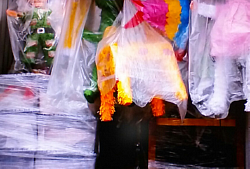 2nd Container: Port of Origin – Agua Caliente, Mexico
Huge piñatas hung from the top of the container. Ty noticed the Mariachi costumes and instrument cases. Mo was willing to take a risk. Uzi however wanted this container. I really can’t see why Uzi would want this merchandise other than to “up one” on Eyal for scoring big on the previous container.

Uzi had the highest bid or did he?

Mo stepped up to face off John the auctioneer and expressed that he had the last bid. Mo even shielded himself in front of the container and had to be removed by security. Small shipyard brawl ensued which is now a bit synonymous with this show.

Did Mo bid? I replayed the scene and Mo’s bid was a tap on his chest. It went unnoticed by John the auctioneer.

Note: It’s the responsibility of the bidder to make sure the auctioneer sees your bid, but come on, there were only two parties bidding on this container. I can’t see why John missed it.

Cuban cigars are illegal to buy in the States. Uzi found a guitar soft case full of cigars. It wasn’t until Shlomi walked to the very back of the container that he found a box and yep, they were Cuban cigars.

Eyal found humidors. Uzi and Shlomi clueless to what those were so he had to explain it to them. Sigh. The illegal cigars had to be turned in to John, but the profit would be made by the rest of the merchandise. 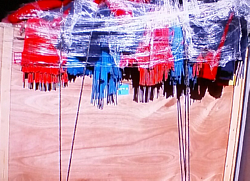 3rd Container: Port of Origin – Jacksonville, Florida
Giant crate in front with what appeared to be brand new sponge roller car wash brushes. Matt and Jason very interested in this container, however the “Matt Attack” bid beyond what Jason could afford. Jason, disgusted with the whole situation, just walked away from the auction.

Matt carefully took down the brushes and laid them on plastic to keep them clean. He opened the first crate… a massage chair?!

What does a massage chair have anything to do with car wash equipment? Matt was less than pleased. He did find the Max Controller system for a car wash. Now he’s in the money. Commercial vacuum, plethora of car wash supplies, but he did not find the motors.

Matt: Don’t get upset. This is an easy sell for me. Just move on. 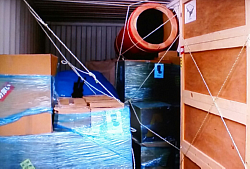 4th Container: Port of Origin – Hong Kong
Crates and boxes. Mo noticed photos of camera lens on the boxes which could be worth a ton of money. Matt however speaks Chinese and knew that those were not lens, but coffee mugs according to the Chinese labels.

I think someone is about to get screwed, don’t you? Mo made sure John saw his bid and would not shake John’s hand after he won the container. Bad vibes at the shipyard.

Mo: That one hurt bad. We need to bone up on our Chinese.

Would you have bought the piñata container?

Please leave your creative opinions in the comment box below.