How to Tell which Comic Books are Valuable 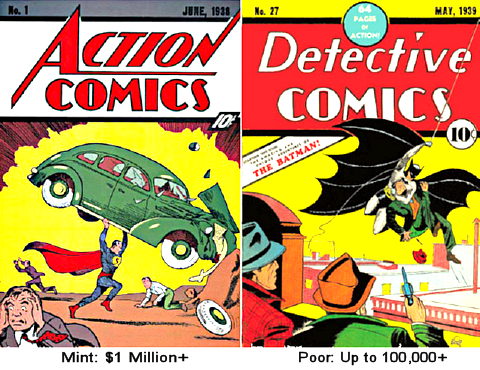 A storage hunter at a storage auction in the San Fernando Valley bought a locker and found movie star Nicolas Cage’s stolen comic book worth a million dollars!

Action Comics No. 1, published in June 1938, in which Superman first appeared in a comic book.

Present day, that issue is still regarded as one of the most important comic books ever published.

I know, the chances of you finding a $1 million dollar comic book in a storage unit are the same as winning the lotto (it could happen).

But what you could find inside a storage unit you win online are comic books worth anywhere from $1,000-$10,000.

First, let’s comic book educate you. The year in which a comic book was published will determine if it has $$$ value.

Any comic book published from 1980 to present day is pretty much worthless. Over printing and extensive hoarding of issues by collectors decreased any potential value.

You know that collecting comics is a current trend because of all the superhero movies flying out of Hollywood.

Check out the grading guide over at ComicPriceGuide, click under “Grading” to see what the qualifications are for each grade.

If you believe that only a near mint old comic book is the only type with any true value, you are mistaken.

A contractor who was remodeling a home found that same Action Comics No. 1 inside a wall. It was used as insulation along with newspapers (what were the owners thinking?). The comic book was not in the best condition but the estimated value was $100 grand.

A mint condition Detective Comics #27 published in May 1939, which was the origin and first appearance of Batman fetched a whopping $1,075,500 at auction. The individual who originally bought this comic paid only $100.

Now here’s the kicker… that same Detective Comics issue in piss-poor condition may be worth $25,000 dollars.

Now do I have your attention?

To have your comic book graded, try Comics Guaranty LLC grading service. They will examine any comic book, assign it a grade and encase the comic book in a protective plastic shell for a fee.

Check the publication date of any comic book that you uncover in a locker, the older the better, and don’t throw it away if it’s in poor condition. You could be throwing away thousands of dollars.

Have you found comic books in your storage units?