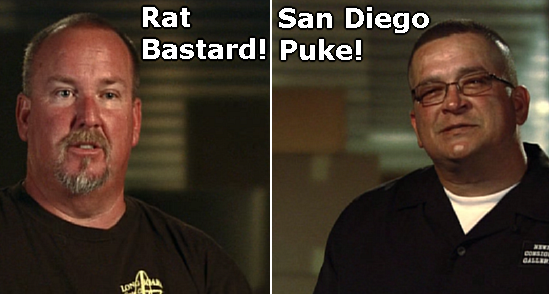 In the parking lot, Darrell scratched on a number on Dave’s box truck. How did Dave react?

Dave: Don’t stand around my truck, you San Diego pukes.

Hester flashed $10,000 cash at Darrell and Brandon. Told them he would buy everything that was good that day. Darrell determined not to allow that to happen. Jarrod pleased at the rambunctious attitudes. If those two bid-iots overspend, that would allow Jarrod to steal a couple of storage units.

1st Storage Unit
Refrigerator, office chair, reception counter, beauty salon chair, and more salon equipment. Dave was out. Brandi wanted the locker. Jarrod did not want to do the heavy lifting of the salon equipment.

Barry: The two love birds were quarreling which was good because it was kind of distracting.

Barry won at $275. As he removed merchandised from the locker, a few

items broke, or were tossed. So it began, Barry’s method of cleaning out a locker – Toss, Break, Repeat. He did find a miniature piano.

Appraiser stated  it was a Marshall and Wendell (1928) miniature salesman’s piano sample. The detailing and wood was an exact replica of the grand piano. Valued at $10,000-$12,000.

2nd Storage Unit
Brand-new auto detailing trailer, commercial cleaning equipment, and tools. Dave’s tactics not to let on he was interested by his criticism of the locker. He needed acting lessons.

Darrell: When Dave is really interested in something, he starts criticizing it and trying to make it look bad.

First bid war ever on the series between Darrell and Dave. Bid rose to 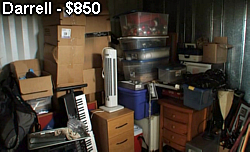 3rd Storage Unit
Furniture, keyboard, boxes, fan, rubber bins, and other miscellaneous items stacked neatly inside. Dave decided to use reverse psychology by acting interested in the locker, although he’s not. He placed a bid at $300, then raised the bid to $400. Like that wasn’t transparent.

Darrell: If he wants a war, I’m going to give him a war.

Dave dropped the locker on Darrell and made him pay $850. Would the mediocre locker yield a “Wow” factor? Darrell and Brandon began their search. Camping stove, towels, a lamp, and then Darrell shouted – ‘Whoa, Baby!”

Dave still in the parking lot overheard the excitement. Went to investigate.

Dave and Darrell peered inside a box full of baseball sports cards. Each one vintage and had value. Dave left with envy, though he would never show it. Darrell scored as he found more boxes of sports memorabilia.

Darrell: America pay your rent, or I’m going to own your stuff.

Notes:
1. Before the auction began the auctioneer stated, “I’m Dan, (points to) Laura, we’re with American Auctioneers.”
2. First time Dave elongated his “Yuuuuuup” bid.
3. Not all of Dave’s bids contained his signature “Yuup.”
4. Episode trivia that a baseball signed by Babe Ruth sold for over $15k.
5. First time Laura said, “Pay the lady.”
6. First time 3 items on the show were appraised.

Jarrod explained to Brandi that either you win or you dump it (storage unit) on the other person. That there was always a bidding war and that he had to work smarter. Like playing poker, you go all-in just to push somebody around or take them out; whatever it takes to make a dollar.

Brandi: Yeah, that’s the father of my children.

What did you think of this first bid war on the show?