No coffee equals a cranky John Luke. Mike’s wife told him to buy shabby chic. Clueless to what that means. Maybe he should ask Candy and Courtney, they would know.

1st Room
One cardboard barrel, few boxes, and uh, yeah, that’s about it. Joe P had a stupendous strategy. First he made his bids obvious then misdirected his intentions. Here’s how it worked.

Bid up to a point. Joe P then said, “Let him have it.” Next Joe P nodded to bid again. BRILLIANT! Mike got played! Joe P won the locker with this amazing misdirection at $425. Candy and Courtney were fooled as well.

Joe P: I’m in the business to make money, don’t forget that! 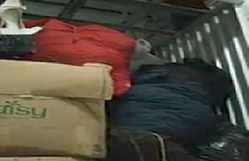 2nd Room
Bags and bags of clothing. Say it with me, ‘Ugh.’ Not appealing to most players, but Candy wanted the storage unit to beat the guys.

Courtney: We said we were going to play dirty, not buy dirty.

Candy had the bid bug and won at $600 for dirty laundry. What was she thinking? What did they find? Dirty laundry! Shout it with me: ‘UGH!’ Their surprise item

was a vintage plumber’s snake. Yep, that summed up the room.

Marco kitchen sink snake with crank made in the 1920s. Not operational due to it’s wear and tear. Valued around $250.

I think Joe P stroked your bid up, Mike. Oh, The Hustler won, but he paid big –  $1,100. I think he got played twice unless he can flip a nice profit.

Where do you go to get that appraised? Out of Flatbush and into the backwoods. The assortment of items included an electronic tester to test the color of the maple syrup. Spiles pierce the tree and aluminum buckets with lids to collect the syrup. Total value at a whopping $26. Wah, wah, wah.

Mike,  get out of the stinking fresh air and back to the city.

What did you think of Joe P’s bid and misdirection tactics?

Please leave your insightful opinions on this episode in the comment box below.