Storage Wars: New York: Who is the REAL Mike B? 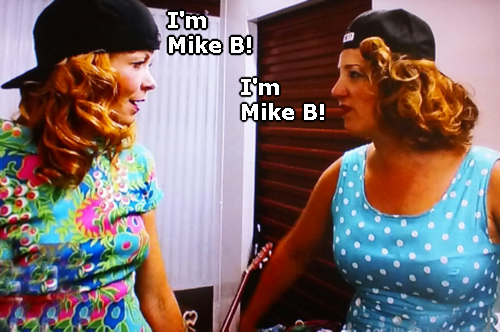 JoeP’s strategy to find mid-century modern which he stated was a hot seller. Mike’s strategy was LFO – Large Fencing Operation (buy big to sell big). He had 12 tables to fill at a flea market and needed merchandise. Tad’s strategy was ‘specificity’ (say that three times really, fast). Chris couldn’t pronounce it. Candy’s strategy was to buy enough for their upcoming 4-day sale. Courtney’s strategy was not to allow anyone to get in their way.

Courtney: Get in our way at your own peril.

Unless there are any objections, on with the show…

Yep, Big Steve banged against the wall/doors again and guess what? John Luke DISQUALIFIED him from the first auction. Did the giant take it well? Not at all. He banged. He whined. He flustered.

He got right up in John Luke’s face and was totally ignored. Finally, defeated, he walked off.

Big Steve: You got to give me a warning.
John Luke: I don’t got to give you nothing. You’re a pain sometimes, you got it!
Big Steve: Any rules I need to know auctioneer.
John Luke: Behave like a normal human being.

Let’s give John Luke a round of applause!

Candy won at $1,200. C&C found cables, microphone stand with filter screen, sewing machine, 20 purses, and boxes of clothes (not designer though). They did find a one-piece racing suit to appraise. Candy slipped into the over-sized suit. She teased as she she took it off.

Candy: Excuse me. Can you tell me how much this is worth?
Courtney: Vroom. 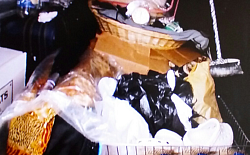 2nd Room
Shopping cart and a mess. Who stores a shopping cart inside a storage unit? Well, Big Steve did behave and won at $1,200.

The room was packed with suitcases and clothes.

He found a religious book and circumcision shield valued at $600 for both.

He found an old tripod, art books, empty frames, photographs, sketches, sculptures, and much, much more.

JoeP: I’m about to have an art-gasm.

Art expert assessed each piece of JoeP’s art at his ‘secret warehouse.’ Several pieces were museum quality. One artist that I will mention was Nelson Lerner from Brazil. He was set to design the FIFA poster for the world cup. JoeP had rare Neo-Pop velvet art pieces by Nelson.

Art expert assessment of the value of all the art work at $163,600. First, how in the WORLD did she come up with that figure? Before you fall out of your chair JoeP, remember art is subjective and the art market fluctuates. Sell the right art piece at the right time at the right place and yes, you can make a small fortune.

Auction was over. Mike once again burned by the Brooklyn curse and left without a room. Chris mentioned too much drama and the he was ‘fragile.’ We’re all fragile, Chris.

Would you have gone all-in on the art storage unit?

Please leave your insightful opinions about the show in the comment box below.