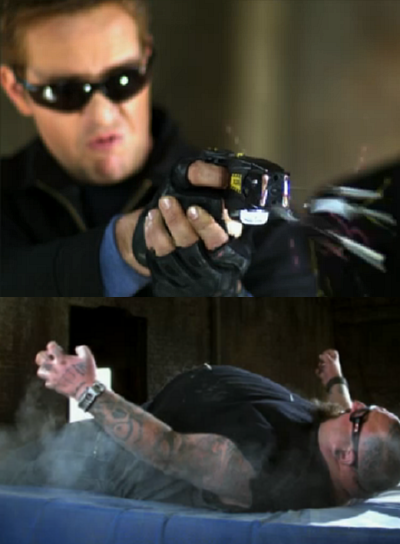 It’s a cold winter’s day. Three storage units up for auction. Allen and Ton brace the cold but immediately feel a chill when they spot their opposite gender team nemesis.

Man-haters Thelma and Louise back to grease the wheels of irritation for the Haff-Ton team. Allen and Ton drew near to the Blonde and Brunette to offer a truce.

Allen: If you take it easy on us I’ll let you wear my jacket.
Blonde: No thanks. I’d rather freeze to death.

First unit up for auction was tagged as the “Trash Unit.” Why? Because it’s full of freakin’ garbage! A can of chili, few boxes, and a mangled mess of mess. No one and I mean no one in their right mind would bid on this unit, except for Allen.

He won the unit for $5 then flipped contents for a near $6,000 profit! Before we discover what he uncovered let’s see what Thelma and Louise were up to at the next two storage units up for auction.

Second unit had quality antique furniture, an old refrigerator, rattan furniture, and boxes. Haff-Ton team agreed on $2,500 as their cap.

Let’s not forget the man-haters. Don’t know if they have a cap for loathing.

Allen started the bid at $500. Thelma and Louise doubled that bid. The bid war continued and the Haff-Ton team reached their agreed limit of $2,500. Man-haters shouted: $3,000.

Score one for the gals. The last unit was stacked with rubber containers which were carefully wrapped. Allen and Ton agreed on $1,000 as their cap. Gals would not let up and finally the Haff-Ton team reached their $1k limit.

Auctioneer said, “Going once.” At this time Allen and Ton shook hands. “Going twice.” Then echoed the shrill of Thelma and Louise going over a cliff on the bid: $1,500.

Allen and Ton lost two units. What’s left to dig through? Trash and more trash. But it’s what was hidden beneath the trash that put them in the money. A set of oars they estimated worth $50. Turkey fryer maybe could bring in $125. Tazer kit and a very old spearhead to have appraised.

Haff-Ton team took the tazer kit to weapon specialist Shawn at the L.A.P.D. training unit. Model was a standard issued police X26 Tazer. Valued at $2,500 but Shawn would buy it for $1,700 if it worked.

That meant testing the tazer. Ton made the perfect target. All he asked was that Allen aim high away from his jewels, if you know what I mean. Did the tazer work?

Ton fell over backwards onto a padded mat like a ton of bricks. But I don’t believe the “actor” Ton would allow himself to get tazed, do you? The true reaction when tazed is beyond the pain “played” by Ton. Can’t say it wasn’t entertaining to watch him fall, though.

The other item of value was a spearhead. Marcus a weapons collector flabbergasted at the artifact. The oxidation and style of artifact dated the weapon back about 2000 years. Possibly a Roman spearhead judging by the way it was constructed. Appraised at $5,000 and sold to Marcus for $3,800.

Question to ask, “Is it possible to win a unit for almost nothing and make a huge profit.” Yes.

The other question to ask about this episode, “Do you really believe the Auction Hunters stumbled onto a miracle find such as an ancient Roman spearhead in such a trashy unit?”