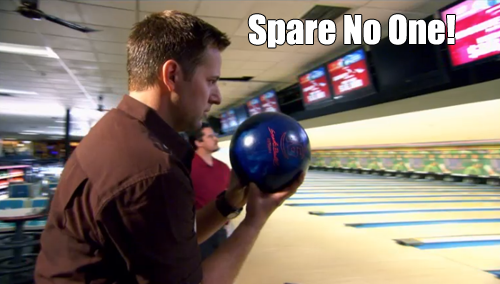 Haff-Ton team drove to Moreno Valley, California. Rain, rain, go away… but the duo have an auction to go to today.

Moreno Valley was Ton’s old haunt. He learned the tricks of the trade here in his early auction hunting days. Back to prove himself and his skills.

Allen found a Blue Ball jar. Lid was still in one piece.

Fact: A cutlass is a short, broad saber, first used by 17th century sailors and pirates.

Duo confused when they noticed the cutlass had an attachment mechanism like a bayonet.

Ton opened a case and found a rifle that attached to the saber. Duo speculated the cutlass-rifle was mid-18th century. 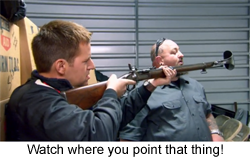 Haff-Ton took the antique gun to Blaze, gun expert, who stated the rifle dated back to 1860’s. It had been used by the Navy. Rifle had originally been a muzzleloader.

Fact: As muzzleloader is a firearm that uses black powder; or cap and ball ammunition.

Muzzleloaders took a minute to load four rounds, IF you were fast. This one had a

breach loader, designed by Snider. Made it much quicker to load. This was an early version of the bolt action rifle.

Fact: Snider-Enfield rifles use a massive .577 round favored by rhino and elephant hunters.

Haff-Ton team had to move out the couches before they could get to the press. 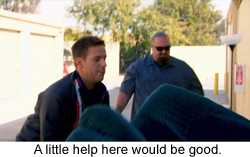 Couches cleared. But it wasn’t a press. It took a few minutes before they spotted a Brunswick sticker.

Fact: Brunswick manufactures everything from billiard and bowling gear to bikes and yachts.

Fact: The mechanical pinsetter was invented by Brunswick’s competitor, AMF, in 1936.

Ton stumbled upon a penny press.

Fact: The first penny press debuted at the 1893 World’s Fair in Chicago.

Fully mechanical with engraving plates. Anything could be stamped on a cent.

Fact: Mutilating U.S. currency is legal, as long as the intent is not to commit fraud.

Allen put up an ad for the pin setter. Found a buyer interested. Took mechanical pin setter to Mike, a bowling alley

Mike explained that very little had been changed in the designs of pin setters since they were first invented.

Fact: The teenage workers who reset the pints by hand were called “pin monkeys”

This machine could set up pins in 5 to 6 seconds. Mike was interested, but did it work?

Mike installed the pin setter onto one of the lanes. Allen flipped the power. Concern – parts might overheat. No deal until the three men bowled a game.

Allen’s game amateur. Ton would do a bowling team proud. Mike, strike after strike. Good news – no overheating on machine.

Fact: Parker Bohn III has rolled 85 perfect games in his 24 seasons as a pro.