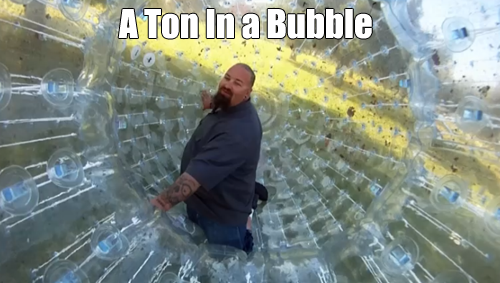 Chair set was made of solid oak. Mid-century fabric belonged to vintage 1950s chairs made with Naugahyde.

Fact: “Naugahyde” is an American blend of artificial leather trademarked in 1936.

Fact: “Princess” is a pattern of glass made by the Hocking Company in the 1930s.

Duo retrieved a carpet rolled and duct taped at the ends. Ton wondered why anyone would duct tape a carpet. Allen’s response: “Because you have a dead body.” 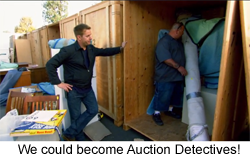 Fact: The oldest surviving carpet, found in a Siberian tomb in the 1940s, is over 2000 years old.

Jones however, did find one very long, l-o-n-g, gun.

Fact: The longest gun ever built is the 140 ft. long “Gustav Gun,” used in WWII.

Allen and Ton both carried the gargantuan gun to Brian, a firearms expert.

He told them it was a “punt gun” used to lash onto a boat. It could decimate an entire flock of ducks. Really? Longest gun you’ll ever see just to kill ducks?

Fact: A ‘punt’ is a flat bottomed boat propelled with a pole and used in shallow waters.

Punt gun in good shape. Logo was made with a Dremel Moto-Tool, which

was a newer model.

Fact: The Dremel Moto-Tool first hit the market in 1945.

Fact: Punt guns can fire over one pound of lead shot at once.

A ginormous gun appears only once in a blue moon. Brian knew that – Sold at $5,000! Allen and Ton allowed visitation rights.

Dresser, bubble wrapped items, and crates. Duo gambled and won the container for $250.

Allen found handlebars to a Segway. Ton did better. He found three whole Segways in the back.

Fact: The ‘Segway’ is a two-wheeled vehicle that one controls by shifting their weight.

Fact: “Zorb” balls were first invented in New Zealand in 1994.

Ton explained to Allen that people entered inside the Zorb then rolled downhill or even rolled on water. Yeah, they had to give it a go.

Segways were taken to Suzanne, a dealer, for appraisal. She said they were first generation Segways.

Fact: The name “Segway” is derived from the word ‘seque,’ which means ‘smooth transition’.

Fact: In 2001 the ‘Generation 1’ Segway was featured on the cover of Time magazine.

One of the machines was past repair. Two were in good condition. Two Segways. Two Auction Hunters. Allen and Ton took the Segways for a spin.

Suzanne was impressed and bought the pair for $5,500.

Would you like to walk over water inside a Zorb?