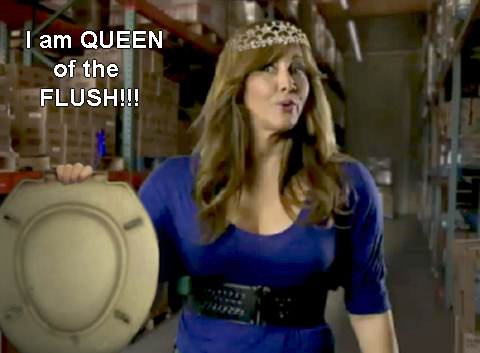 You win some. You lose some. But on this show, when you lose, you lose B-I-G!

Penny the auctioneer asked Moose to “pop that lock” and uh, hmm. Boxes, lots of them, packed from floor to ceiling.

Mo, Ty, and Matt were not eager to bid on the unknown. That left the beauty queen and the hillbilly. Jason’s vocal bids were “Toodle-oo, skip, skip.” Huh? Whatever that means.

Deana raised her hand with firm determination to take this container, and that she did at $9,000.

Excited, she opened the first box which was full of ball caulk for toilets. Ugh. Second box, toilet seats. This was getting ugly. Deana dug deeper. Next box she opened full of Brondell luxury electronically controlled toilet seats, top-of-the-line, which included seat warmers and built-in bidets. Each retailed at $2,000 a piece!

Big boxes in back contained Ariel state-of-the-art shower units. Temperature controlled showers, each with four shower heads. And she had four Ariel units retailed at about $5,000 a piece.

Mo and Ty squabbled over container. Ty kept bidding and Mo told him to stop. Mo boasted that “He’s the boss and he’s the man” but Ty didn’t take too kindly to those remarks. A push here, a shove there. “It’s our money!” Both have trust issues.

I think everyone on the show should get some counseling, don’t you?

Jason won at $4,000. What did he find? Old educational crappy supplies along with old 8-track tapes! What was he thinking? Huge loss on the container.

Visible were stuffed animals. Matt uninterested as was Deana. But Ty noticed one of the stuffed animals had video and audio cables attached to its rear end. He told Mo he had a hunch big money was to be made on this container.

Mo, off to prove a point on “trust,” push the bid over the cliff to $10,500. Once inside the container Ty took a closer look at the stuffed animals. Eureka! He was right.

Ty: Do you know what these stuff are?
Mo: They’re stuffed animals.
Ty: They’re hidden cameras.

Stacked from floor to ceiling with low and high performance tires. Matt saw money, but so did Deana. Mo and Ty were out to make Matt pay through the nose, and that he did. Matt won at $21,000.

Matt scowled at everyone at how he was the big winner. He figured he’d double or triple his money. One problem though, he didn’t take a good look at the tires to notice they were defective.

He pulled one out, ripped. Matt pulled another out, ripped. Each and every tire ripped. No profit and insult to injury, he would have to pay a $3,000 recycling fee to move the tires.

I really shouldn’t laugh at his misfortune.

Hey, Matt’s not the nicest crayon in the box, so I’m not crying a river for him.

Though all of the merchandise was wrapped in plastic, it appeared like vintage soda fountain equipment. Deana and Jason fought hard, but Deana was distracted by Mo.

Mo stuck his tongue at her. Called her “Crotchety.”  Deana finally blew up in his face and yelled, “Mo, stop, you’re getting on my nerves!” Uh, Deana forgot to bid. Jason won at $22,000.

Definitely, they all need counseling.

Jason did find a soda fountain in excellent condition; vintage candy machine that took nickels and dimes, plus a jukebox. He checked the back of the jukebox and it had the plate: Wurlitzer 1946. He’s in the money!

Let us know your creative thoughts on this episode in the comment box below.