Container Wars: I Want My Mummy 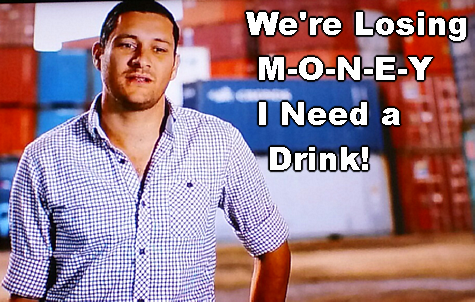 Jason received a tip that there’s a boat inside one of the containers up for auction, and he loves boats. The rest of the cast busy eating their breakfast burritos at the concession stand. The happiest cast member at the start of the day was the auctioneer John Kunkle, because he could smell money in commissions about to fall like rain upon him. 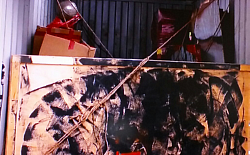 1st Container: Port of Origin – Los Angeles
Originally destined for London but container had sat for six months. Hopefully merchandise was nonperishable. Huge crate blocked view. Lots of red shrink warp. There’s a boat, but it’s a dingy. A cage, suit of armor, and a lot of unknown.

Eyal: If it were that unique an antique they would never wrap it like this.

I’ll have to agree with Eyal on that. Jason knew the Israelis wanted the locker, so he would make them pay as would Mo. Eyal said, “They played you.” Did Uzi listen or Shlomi listen?

Israelis won, but what was inside the container? Costumes and props. Remember, the origin was LA, as in Hollywood. Uzi called his brother-in-law to get someone to appraisal it. Don’t you just love broken English?

Trio had the merchandise hauled back to their store. Two items were appraised: 1) Suit of Armor and 2) Mummy Casket. Neither were authentic, in other words – FAKE! Eyal was right. Uzi and Eyal locked Shlomi in the mummy casket. That was funny! 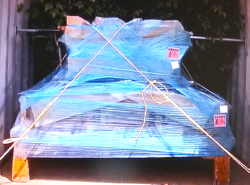 2nd Container: Port of Origin – Bali, Indonesia
Blue shrink wrapped crate in front and foliage in the back. Mo convinced that was high-end teak wood furniture. Jason knew Mo wanted this locker so again, he would raise the bid and make his cast mate pay through the nose.

That the duo did, way over paid. There better be something high quality in that container.

Mo and Ty pulled out two authentic teak wood benches and a chair. So far, so good, but it would end there once they got the foliage out of way. Office furniture, filing cabinets, office desk chairs, and a few travel vouchers. 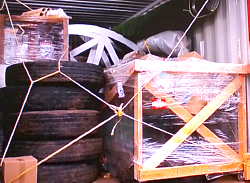 3rd Container: Port of Origin – Beaverton, Oregon
Destined for Panama. Four huge tires, green turf, and small Eiffel Tower prop. Deana spotted a gas can and an item hidden in the back; possible vehicle perhaps? Deana gets what she wants.

She bought a full 18-hole mini-golf course: golf balls, clubs, and green turf. Props included were the Eiffel Tower and the Statue of Liberty. Under the tarp, two brand new go-carts.

She strapped herself into one of the go-carts and drove off into the sunset.

Jason upchucked his lunch. Smell of rotting fish permeated through the air. Matthew not bothered by the commotion. He looked through his binoculars saw fishing poles, fishing nets, and possible commercial fishing equipment.

Even with the stink-stank-smell bidders played to win. Jason couldn’t understand it and said by the far the best quote of the whole season. Read it carefully, twice if you need to:

Did you get that? Yeah, I know (pardon the pun).

Shlomi promised Jason if he won a boat, he’d bring the girls. That was all the motivation Jason needed to win the container. First item he looked into was a cooler and guess what he found?

Now I want to hurl, gross. Crate contained crab pots (cages to catch crabs). Jason also uncovered some diving equipment, fishing poles, and a small motor boat. Yep, he got his boat after all.

Would you have bought a stinky container?