Deana heard a rumor that there was a container filled with jewelry and was major money. Buzz, buzz, buzz as the rumor circled about. Mo wanted to know how does anyone know that a container’s been lost at sea? Exactly, Mo. Who told Deana? Hmmm… 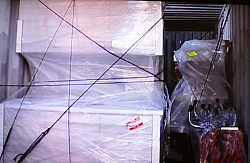 1st Container: Port of Origin – New Orleans, Louisiana
Destination was Los Angeles. Sat at the shipyard for six months. Cabinet up front, the type you see at a doctor’s or dentist’s room. Dentist’s chair toward the back.

Both Matt and Ty have dealt with dentist equipment, so they understood the value. Matt’s concerned was if anything was damaged during the sea haul, it would be nothing but scrap.

Mo: No one is taking this container from us… no one.

Those words came true. Team Muscle uncovered not one but two dentist’s chairs, an x-ray illuminator, three commercial grade dentistry lighting, and boxes full of uh… toothbrushes and miscellaneous dental stuff. While Ty understood the value of dentist equipment, Ty & Mo did not understand how not to overpay. 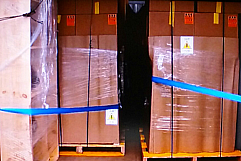 2nd Container: Port of Origin – Republic of Singapore
Destination was Oakland. Sat for six month at the shipyard. Motorcycle helmets were visible but the rest of the boxes a mystery. Matt read the labels (in Chinese) and believed there were speakers or electronics worth near $70K.

His “Matt Attack” bids won him the container and for the first time, he did a happy shuffle dance. Yes, Matt needs dance lessons.

Matt: That’s how you do it. You make educated decisions based on facts and experience, not some high-in-the-sky rumor. Gimme a break.

Oh, Matt… you’ll live to regret those words because the rumors were true. Wait, I’m getting ahead of myself. The last container was not at the shipyard but still lost or now FOUND AT SEA. That’s right. The container was UNDERWATER. What’s the first thing that comes to mind?

To get to the container, the players were flown by helicopter to a cargo ship. From there a crane lifted the small container out of the ocean. I know what you’re thinking… how did they find that container? No clue, really. 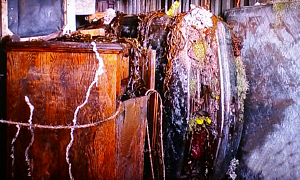 It’s one of five containers lost at sea (yes, I know you’re rolling your eyes). Once security “popped that can” what do you think was inside?

Damaged mattress. Salt water. More seaweed. Damaged furniture. So why would anyone bid on this? Uzi stated that Dubai, Kuwait, and Arab Saudic love gold.

You gotta love the way Uzi puts words together. Matt surmised the furniture was for the bedroom and that’s where rich people keep their jewels. Everyone was willing to take a small risk up to $3,500. Then the Israelis torpedoed in with a $20K bid.

No one else was willing to gamble as high as the trio. Israelis removed the wrecked and rotted furniture from the container. They also flung

at the other players, and oh, how the Israelis were taunted, until they found GOLD!

Four small gold bars approximately five ounces each and a bronze statue (yes, rich people have bronze statues in their bedroom). Current price of gold about $1,300-$1,500 per ounce!

The Israelis called themselves “Kings,” not sure about that, but this season they scored the biggest profit off a single container.

Please leave you thoughtful opinions on the episode in the comment box below.