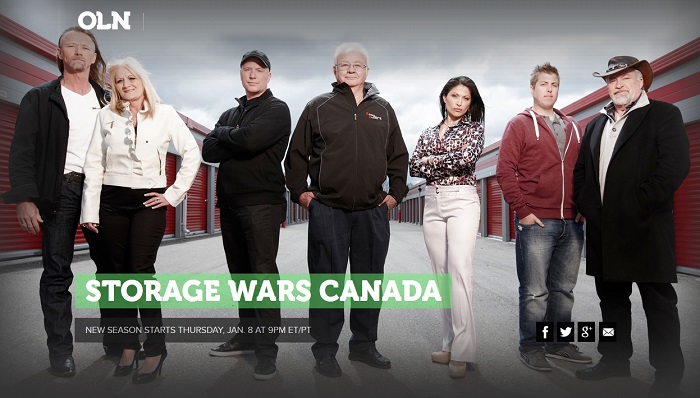 Storage Wars: Canada: Season 1, Episode 16: “Even Veterans Get the Blues.”

The auction was at a storage facility in a nice working class neighborhood. Who knows what they could find in those units?

Rick was in a bad mood. No morning coffee. And the car breaking down on the way to the auction didn’t help elevate his or Cindy’s mood at all.

Paul picked up Bogart on the way there. Bogie got a new phone and was too busy checking texts to listen to his dad give advice.

Paul: I need you to concentrate and pay attention!

Ursula was putting her foot down on what she wanted. One word: FASHION. She also wanted to start building a new strategy for her online store.

Roy prepared his newest diversion. By giving the others presents (Presents from Roy?) they’d be confused. Roy hoped it would give him time to scoop up the best lockers.

He gave Ursula chocolates. She asked Roy if he was trying to make her fat.

Roy: No, but those horizontal lines on your dress are doing wonders for your ass.

Roy had a book for Paul, which he felt would really come into use for him. It was titled, ‘How to Turn Your Problem Children Into Successful Adults’.

Paul: (watching Bogart text)  I think that ship has sailed.

For Bogart, Roy gave him a yo-yo. In case this whole ‘locker–thing’ didn’t work out for him.

And it was flowers for Cindy. Who promptly tossed them to the floor.

Roy: What happened to the love?

Lots of tools; an air compressor, and some high-end speakers. A guy’s locker.

Don suggested to Ursula the unit might be a good purchase. She was not in the mood to hear it. Neither was Paul or Bogart.

Don: How come everyone is yelling at me?

Rick and Cindy were not impressed either. Rick said only a fool would go for this unit.

Roy: I don’t know why everyone is so grumpy. This locker is full of money.

He popped it open and quickly found one great item after another, including some brand new cameras… still in their boxes!

Then he found a very cool crossbow. He needed to find out what it was worth.

Roy took it to his professional hunter buddy, Silvio. He gave Roy a quick demonstration of the bow’s accuracy and how to properly load and fire it.

Silvio told Roy he had found a good compound bow, probably worth around $450.

Roy pondered keeping the bow for himself. Hm. In case he ever needed to shoot a moose, maybe?

Roy took a pass and decided to give someone else a shot. Ursula had her doubts there was any high-end fashion to found inside.

The bids started… leaving a very lonely Paul to pay $125 for this orphaned locker.

Paul: Just like pickin’ up money off the ground!

Rick: Yeah, you keep telling yourself that.

Paul opened it up while Bogie was engrossed in checking email on his new phone.

There were some decent pieces of furniture. And a couple of pairs of… roller skates?

Paul: These don’t look like your typical roller skates.

They took the skates to a roller rink, where a roller derby instructor asked them the boys to come out on the rink with the other ladies and test out their skates.

Several falls and bruises later, the instructor appraised the boys skates for $355.

Not too shabby for a locker no one wanted.

A large unit with a lot of nice furniture items. But still no fashion for Ursula. And she took a pass.

Ursula: I said I was putting my foot down today, and I meant it.

So Ursula turned on her high priced heel and headed home.

Meanwhile, Bogie was wrapped up in his new phone and not paying much attention to the bidding.

But Cindy was definitely feeling this unit. And her and Rick grabbed it for $650.

Inside, they found some nice pieces but nothing amazing. Cindy was feeling very cynical about the whole purchase while Rick wished for a miracle to help alleviate his queen’s bad mood.

Ask and ye shall receive.

A small box Rick found contained a set of dollhouse furniture. It  seemed to be worth getting appraised. At least, to Rick it seemed worth it.

Cindy was not so optimistic. And a cracked mirror Rick found finally sent her for the exit.

Cindy: That’s a bad omen. I’m so out of this unit.

They took the miniatures to a store specializing in… (duh) miniatures.

The owner told them they had very nice, detailed pieces… easily worth around $550.

Cindy was blown away. She finally had a smile on her face.

Cindy: I love being wrong!

Cindy and Rick started having a bad day, but it turned around at the 11th hour. Ever have a bad day that ended with a GOOD surprise?