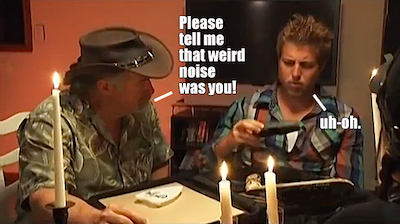 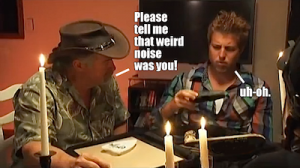 Rick and Cindy decided to let Rick do the bidding this time. Cindy likes it when Rick spices things up.

Roy howled like a wolf. He was ready to hunt his prey. This time it was survival of the fittest.

Paul made Bogart wear a Kahuna shirt as obnoxious as his own. He pronounced them “Team Hawaii”.  Bogart was definitely not feelin’ it.

Ursula brought her equally talkative sister, Sue.  And Roy made his usual gentlemanly introduction to her.

Roy: I hope she (Ursula) told you I like threesomes!

Sue was at a sudden loss for words.

Everyone was not excited. Except Ursula.

Her sister, Sue, gave Ursula good advice and told her to just walk away from this one.

Ursula: You’re not the boss of me.

Ursula and Sue dug around and found a few items, including a pair of lamps. But nothing really worth the effort. And Sue let Ursula know it. At least 10 times.

Ursula: The only way to shut Sue up is to make some money off these lamps.

Ursula took the lamps to an antique dealer who let her know one of them was a mid century modern that could fetch upwards of $300 dollars.

Which shut Sue up. Which made Ursula happy.

A mystery locker. With a serious lock on it. Once they got it opened, nothing could be seen except a few boxes and a label maker.

Rick surmised that mystery lockers are high risk, but can bring a high return. So did Roy.

What followed was maybe one of the most fast and furious bids of the season. It ended with Roy sniping the locker for $285

Roy was quite pleased with himself. Even though he didn’t know what was in it.

Inside, he found a laptop. And a lot of mail. And pre-paid credit cards. And blank checks.

With different people’s names on them.

Did we mention the credit card printing machine? As in a machine that PRINTS credit cards?

No wonder that lock was so hard to cut. Was this Jason Bourne’s storage unit?

Roy: This is uncharted territory. I gotta figure out what to do with this.

Roy did the right thing and turned everything over to the cops. They said they’d let Roy know if he could get some of the non-illegal items back, once they had finished processing everything.

Odds and ends. A fridge, boxes, and a couple tires. And tools.

Paul and Bogart really wanted it. Rick knew it. So he bid them up to $220 before dumping it on them.

Inside, the boys found a box of odd items, including two electronic gadgets, which Paul believed were used to find ghosts.

They both set out into the night where they met up with Kim and Kim. (Yes, they have the same name).

Kim told them they had found a K2 Meter. Ghosts are ‘electrical’ apparently. So when you’re near non-electrical equipment and it spikes, you’re near a ghost.

She said it was worth around $60… if it worked.

The other Kim told them the other gadget was a Spirit Box (used to actually SPEAK to ghosts) and they could get about $80 for it… if it worked.

Much to the dismay of Paul and Bogart (who got a demonstration and the fright of their lives), both gadgets worked.

Roy could have sold the legal items he found and made some money. Instead, he turned it all in and lost his money. Have you ever done the right thing even though it cost you?