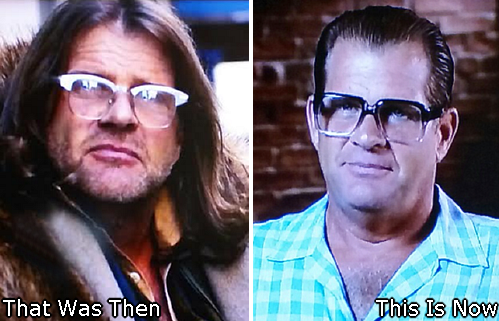 The Fog rolled back into town. Not New York City’s darken state of atmosphere, but Todd McCormick. No, wait, was that the same thing? Well, anyhoo, JoeP’s nemesis was back with a miracle of makeovers.

Cut his hair, shaved his face, new glasses, and rid himself of that scrounge-scowl image. The Fog was now a Clear Day. Todd was unrecognizable to Mike. Courtney asked JoeP if he was upset that F-O-G. was at auction. JoeP retort was, “To keep your friends close and your enemies closer. ” Did you just roll your eyes, because I did.

Candy and Courtney saw vintage and they LOVE vintage. Mike itched to buy and since the storage facility was not far from his home, why not? The price of the room reached over $2k when Courtney finally imploded:

Courtney: Mike B. is like a toothache that won’t go away.

Gallery appraiser stated that was an authentic Tiffany Studios, New York desk set. Roughly dated around 1910. First the bad news. The box glass had been restored. Good news the perpetual calendar  in tact. Notepad glass had never been touched or damaged. Total set valued at $2,200.

2nd Room
Rakes and chairs. Lots and lots of chairs. Mike and JoeP battled, but not really since JoeP only wanted to run up the price. Mike won at $2,000.

Appraiser stated Mike had a Wohler brand viper style chimney sweeper. German made and consider high-end piece of equipment. Valued at $400. Mike wanted to give it a go and try out his sweeper. He was instructed to not break the damper. What did make do?

He broke the damper.

3rd Room
Vintage furniture, boxes, art, and a ton of “stuff.” Biggest room of the day and players were all in, to a point. Mike against JoeP in the end with roles reversed. Mike didn’t want the room but to run the price up. JoeP won at $4,100.

Nooner. Compass with a small cannon that fired at noon (not kidding). Hand-made, so it’s authentic. Place a small amount of back powder into the cannon. Noonday sun lights and heats the hole which then fires the cannon. Yes, it packed a punch. Definitely louder than a noon lunch bell. Valued at $7,000.

The Fog came.
The Fog left.

So much for the F.O.G. We’ll give him props for the makeover.

Which treasure would you keep for yourself; the Tiffany desk set or the compass cannon?