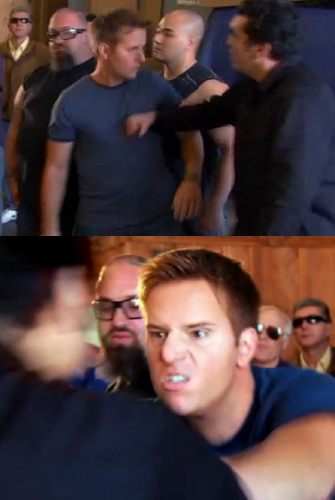 It’s a lovely day in the neighborhood… but not in Chinatown. A fist-nudge. A fierce two-handed  shove. Near fight between Allen and a gangster. Let’s back up to the beginning of the episode.

Allen and Ton got lost on their way to the auction. Big Sis’s directions were horrid at best. Somehow Allen drove the bread truck into a back alley blocked by a delivery truck. Of course the owner of the truck did not speak any English.

The Haff-Ton team arrived about 30 minutes late to the auction and eight crates had already been sold. Thomas the auctioneer stated only two crates were left. Unit #9 held promise. Items packed with care and stacked to the top.

But this was not a normal bid war. This was gang bid war. A small army of Asian gangsters attempted to block the view from the container.

They also intimidated anyone from bidding on any of the crates.

Gangster: What are you doing here?
You guys should stop bidding.
Allen: You’re not serious, are you?
Gangster: Very serious.

Ton dismissed the intimidation tactics and won the crate for $1,700. Allen asked the gang-banger to step away from him. Hold on to your seat because what happened next was a bumpy ride.

Gangster fist-nudged Allen square in the chest.
Allen retaliated with a fierce two-handed shove to the gangster’s chest.

Allen charged forward about to serve the gang-banger what we in Texas call “a can of whoop-ass.” But everyone stepped in to separate the two. Not like anyone would actually hurt Allen with the human-refrigerator Ton by his side.

Thomas the auctioneer cautioned the Haff-Ton team by stating that these guys gangsters were serious, to be careful, and to remember where they were – Chinatown.

That did not stop Allen and Ton from winning the last crate. They did however wait until everyone left the building before they dug into their units.

Ton tested the ancient weapon by blowing a dart at  two hanging balloons filled with water. Busted both balloons straight to a $1,500 sell.

The team took the wire harness equipment to Hollywood stunt coordinator John who stated that the jerk-vest made of leather originated around the 40s. The fly harness originated somewhere around the 60s. Both were museum type pieces.

The other two short harness pieces were in great condition and still usable for present day stunt work. Of course, let’s test them out first to make sure they work.

A crazy fun short film depicted Allen and Ton in a wire-fu fight. (You’ll have to see the episode to see who won.) John liked the product and bought all the pieces for $2,500.

Back at the pawn shop Big Sis hired a DJ named Flula (German, I think?) who stated he could fix anything. We’ll see about that. Big Sis also hired a Brazilian bombshell named Elle who boasted she could sell anything to anyone. I sort of believe that…

This auction brought out the inner gangsta in Allen, so don’t mess with him – word!