Storage Wars: Can You Hear Jaws? 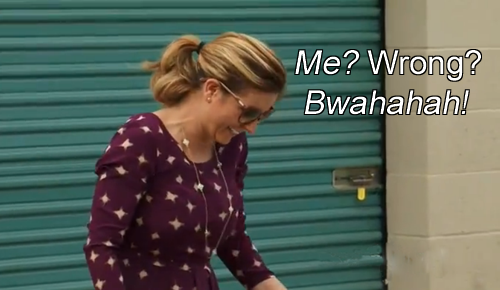 Darrell honked at Rene on the drive to auction. Today’s lesson for Brandon: Physiological Warfare. Ivy decided today was going to be about having fun and messing with the others.

What is it with these players today?

Brandi talked Jarrod that maybe it was time to close Long Beach store. Jarrod wanted to save it by buying a good locker.


Bed set, Legos, suitcase, nightstand, dresser, ice chest, trash bags, and boxes. Ivy and Darrell about to bid war. Ivy used a little psychology himself. He told the security guard Darrell, who was riddled with tattoos, was a drug dealer. Security guard then distracted Darrell. Ivy won the locker for $275.

Ever notice how Ivy hardly pays much for a room? Bottom feeder.

The telephone had a voice transformer along with DVDs for prank calls. He took the

device to a professional prank caller. Is there such a profession and where can we all sign up? Prankster showed Ivy how the machine could alter a voice to sound like a woman or robot.

The machine in very good condition valued at $500.

Ivy: Forget about calling the pizza man, just deliver my $500.

The couple took the meteorites to Alan, an expert at UCLA. Some of the rocks were not from space, but rocks formed from the impact of a meteor. A few of the rocks possibly a few million years old.

Rene: I don’t need college. I went to the school of hard rocks…knocks? Meteorites?

Majority of the collection were too small for any real value. The large rock appraised at $1,000. 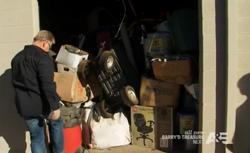 Brandi was NOT happy.

Jarrod: I spent three grand on this unit. But it’s a small price to pay if I can save Long Beach and prove Brandi wrong.

Brandi opened a case to find a type of fish tracking device. The couple took it

to Josh Jones, a researcher at an aquarium, to appraise the item.

Josh explained that the device was used to listen to sea creatures communicate underwater. It was missing the transmitter, but Josh had one and attached it to the device. He placed the transmitter inside a shark tank.

Jarrod and Brandi heard sounds of fish and stingrays. They even heard “Jaws;” well, not the real Jaws, but sharks in the tank. Very cool device however it was an older model valued at $300.

Not enough to save the Long Beach store.

Do you think it’s time for Jarrod to throw in the towel and close the store?